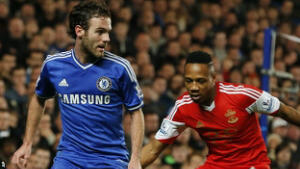 London – Juan Mata is edging closer to joining Manchester United from Chelsea as the Premier League champions try to strengthen their squad after a lacklustre first half of the season.

In a sign that Mata’s Chelsea departure is nearing, a person familiar with the situation said the midfielder did not train with the first team on Wednesday.

United said it is yet to make a formal bid for Mata, but another person with knowledge of the situation said the club is pursuing the Spaniard in the January transfer window.

The people spoke to the Associated Press on condition of anonymity because the transfer is not being discussed publicly.

According to Britain’s Press Association, United has lodged a £40 million bid through a third party.

The 25-year-old Mata, Chelsea’s player of the year for the last two seasons, has fallen out of favour since Jose Mourinho returned as manager in June.

He has not played for the team since the 1 January victory against Southampton.

Chelsea pulled further away from United in the Premier League title race by beating David Moyes’ side 3-1 on Sunday.

While Chelsea is third, just two points from the summit, United is seventh, 14 points behind leader Arsenal.

Moyes accepts there is a need to reinforce the squad, with Champions League qualification, by finishing in the top four, far from certain.

“I fully understand that supporters are keen to see us freshen up the squad with new faces, but January is a difficult month in which to bring people in,” Moyes said in Wednesday’s program for the League Cup semi-final against Sunderland.

“While we are actively scouting players all the time, a lot of the work we are doing now is preparation for the summer.

“If we can do any business now then we will certainly try to do it, but I will not compromise the standards required for a player that can come into this club and help improve it.”

Selling Mata to United could indicate that Chelsea does not see the 20-time English champions as a major rival this season.

United has lost four out of five games at the start of 2014, and was seeking to overturn a 2-1 deficit against Sunderland on Wednesday night to reach the League Cup final.

“We all know that our club is undergoing changes at present, but I have a clear path in my mind and I know where we are going,” Moyes said in Wednesday’s program.

Mata would not be eligible to play for United in the Champions League because he has played in the group stage for Chelsea.