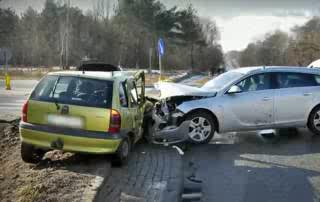 A father who had drunk too much at a pub forced his eight-year-old son drive him home.

Mikolaj Tomaszewski could now be jailed for five years after his son, Juliusz, crashed into another car in Gielniow, Poland, during the ill-fated trip.

Both of them suffered minor injuries in the accident along with three other people.

The 38-year-old had reportedly called his son from the pub and asked him to ride his bike there, and then drive home in his green Opel Corsa.

He was apparently too drunk to operate the car himself and had recently taught his son how to drive in the car park of a supermarket.

Mr Tomaszewski now faces several charges, including endangering the life of a minor